The SYOS artists' lockdown collaboration video of Alone Together, in the Spring of 2020, left an awful lot of music on the cutting room floor, including this entire take. The video is designed to demonstrate the warmer, jazzier side of my signature tenor mouthpiece to demonstrate that it's not just a screamer!

The video was fun to do and comes with the transcription running alongside the music.
Here is the full, written transcription with annotations and analysis:
Summary of techniques here:
1) Bar 6. This is a classic. When modulating to the sub dominant in the minor, transpose your phrase up a semitone to make it the altered dominant.
2) Bar 9. C#m7 to F#7, Am7 to D7 to G is the sequence of the song so it is a small step to complete the Giant Steps cycle with an Eb major cadence.
3) Bar 13. Negative Harmony. The backwards circle of 5ths using minors, heading for the C minor, the B7 altered dominant.
4) Bar 14. Conventional whole tone scale, augmented triads, but a set-up for the more complex triad relationships coming up later.
5) Bar 23. Free variation of the Giant Steps substitutions used previously.
6) Bar 27. Lydian major 7th with the tone above pentatonic.
7) Bar 29. Diminished scale for E7b9 with Db triad for the 13b9 effect.
8) Bar 30. Chromatic approaches make the classic diminished scale less 'patterny'
9) Different rhythmic variations - here seven groups of 4 fill up the bar.
10) Bar 33. For the C false fingering the bottom C fingering loses the B finger, which helps tuning.
11) Bar 34. The tritone substitution is easily swapped for the altered dominant.
12) Bar 38. One of Slonimsky's 12-tone triad combinations (page 177 of the Thesaurus book)
13) Bar 45. Four key 'Septatonic System'. Melodic minor with flattened 4th: E,F#,G,Bb,B,C#,D# divided {Eb,G,Bb}+{E,F#,B,C#}. The second group fits the tonic scale, the Eb triad is outside. Also transposed to A, D and G to fit nicely with E minor Dorian.
14) Bar 56. A Giant Steps take on the Sonny Stitt technique of playing a dominant up a semitone and back. F#m7-G7 >Ab7-Db-E7 > Eb7,Ab,B7 > E
15) Bar 73. The Db triad of the E13b9 has a pull of its own. Playing with the Db tonality by giving the impression of a Lydian dominant gives the startling effect of an Eb triad over an E7. The Ab minor melodic resolving up a semitone to A minor is a nice variation of the Negative Harmony effect. 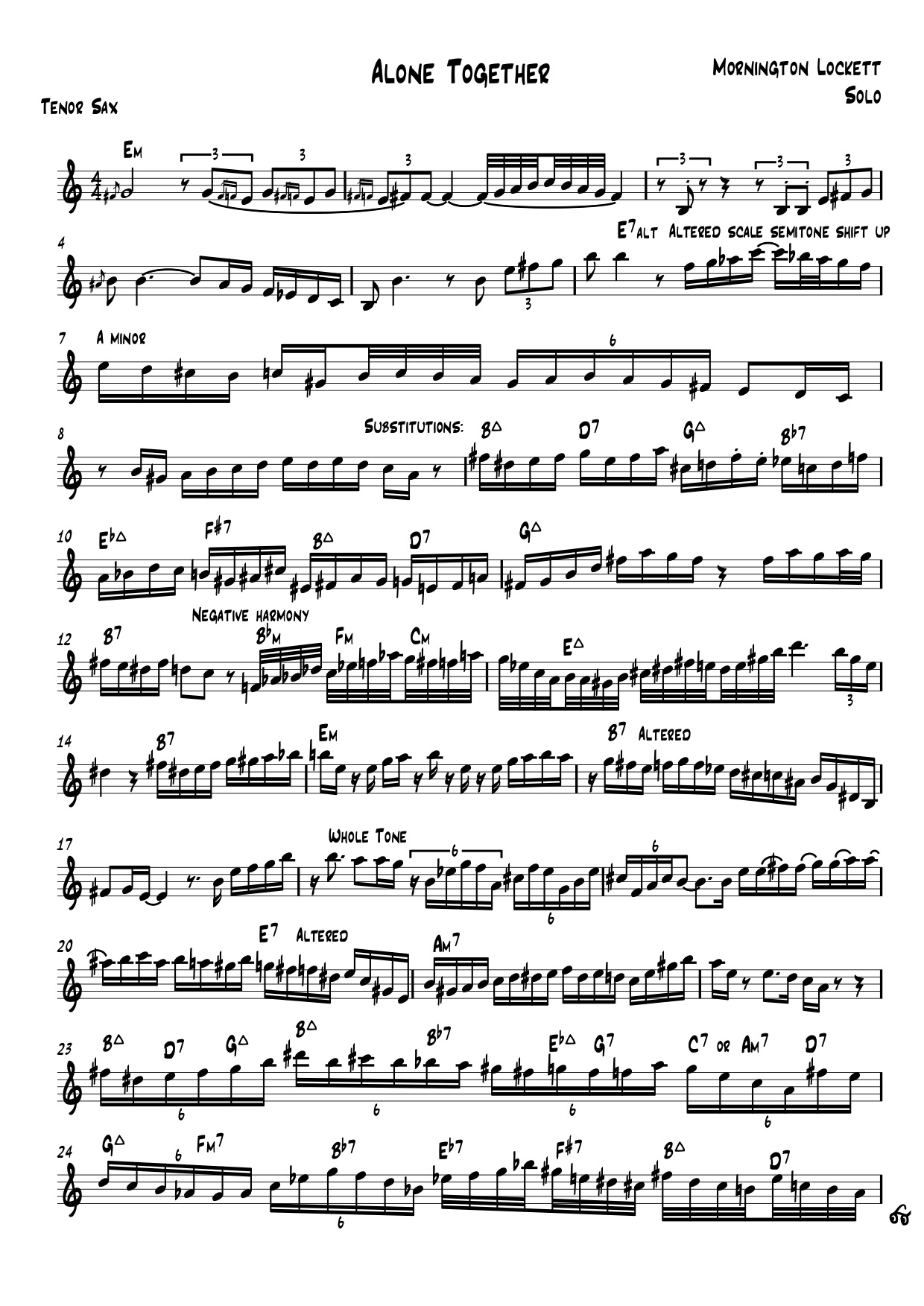 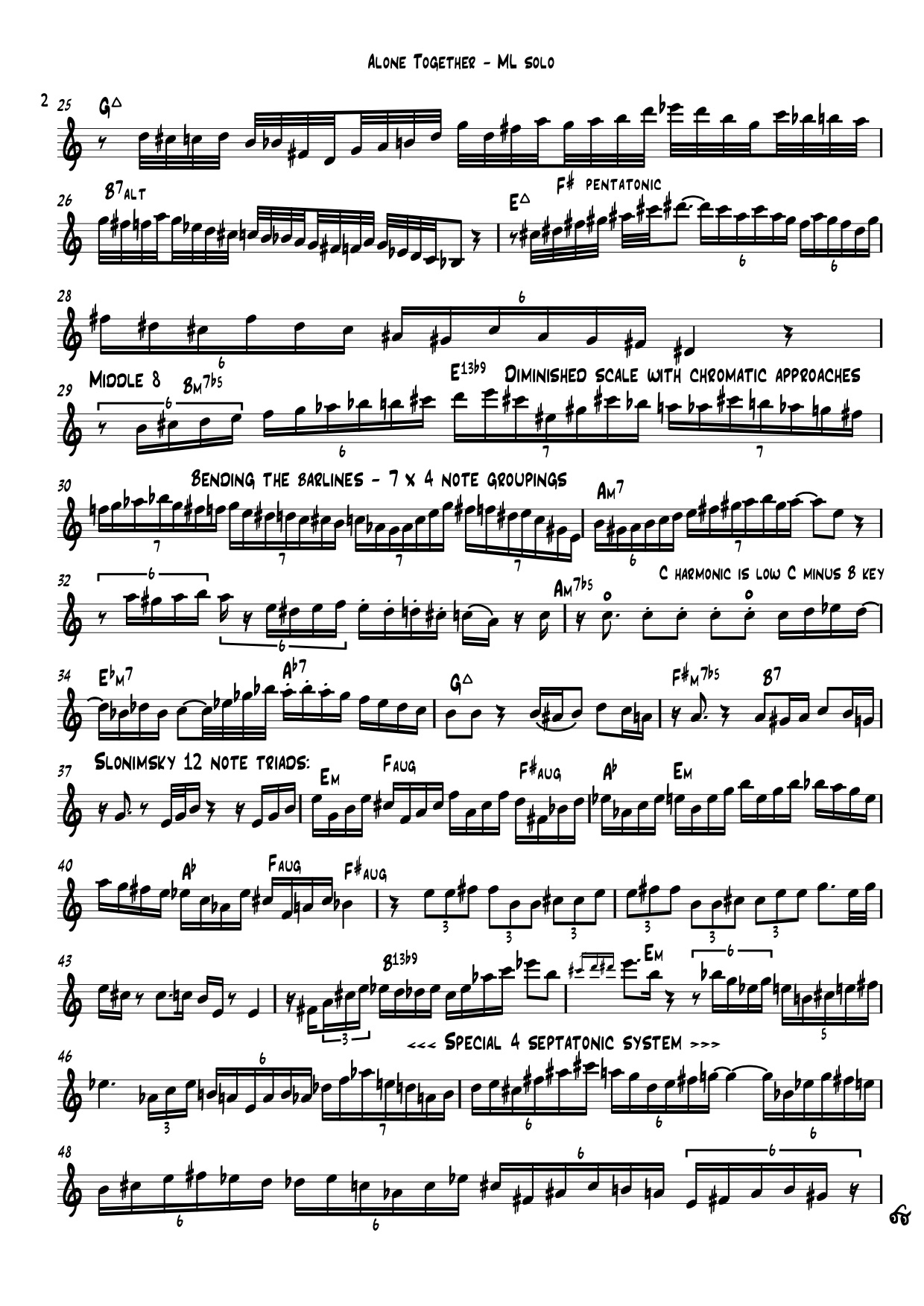 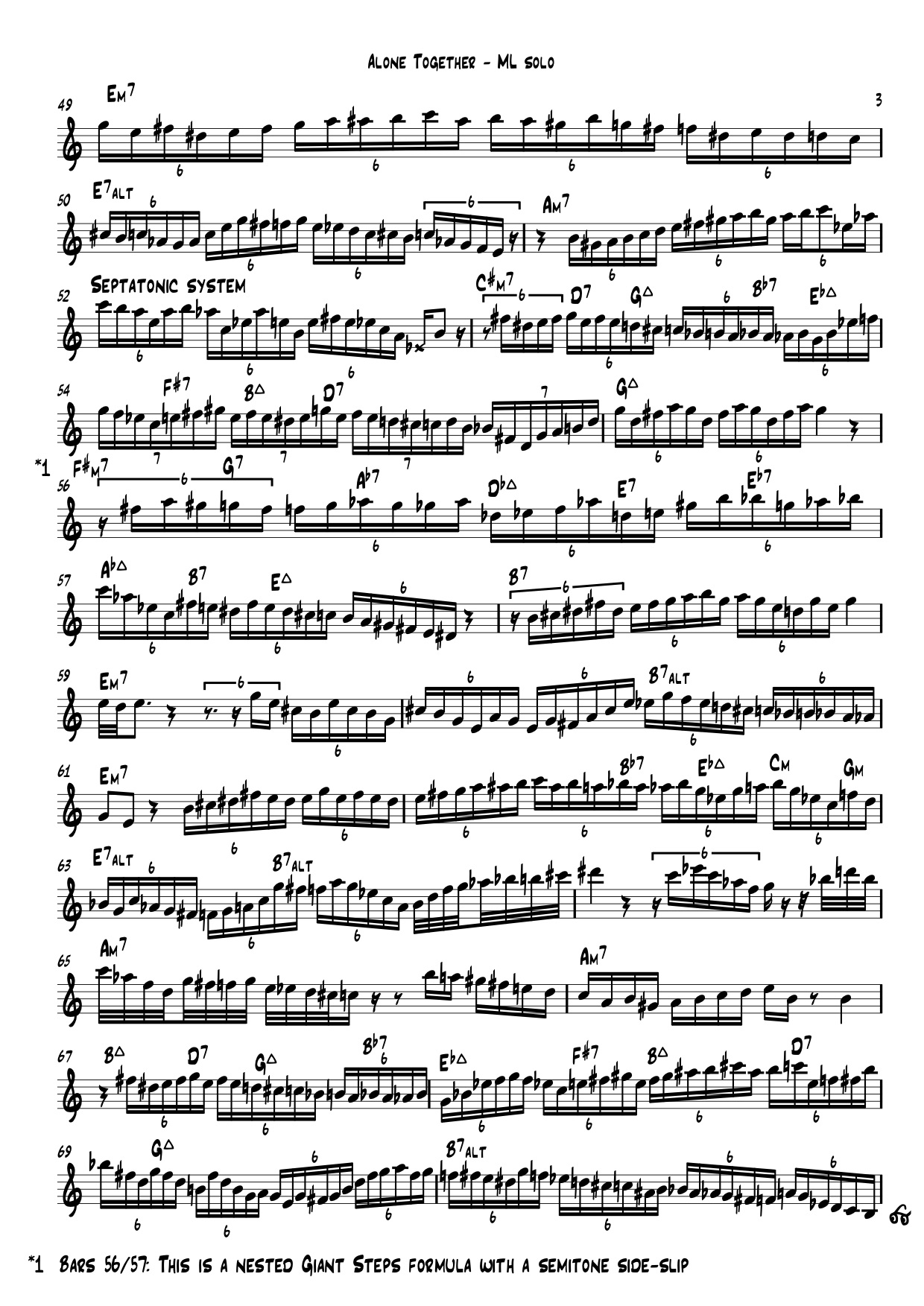 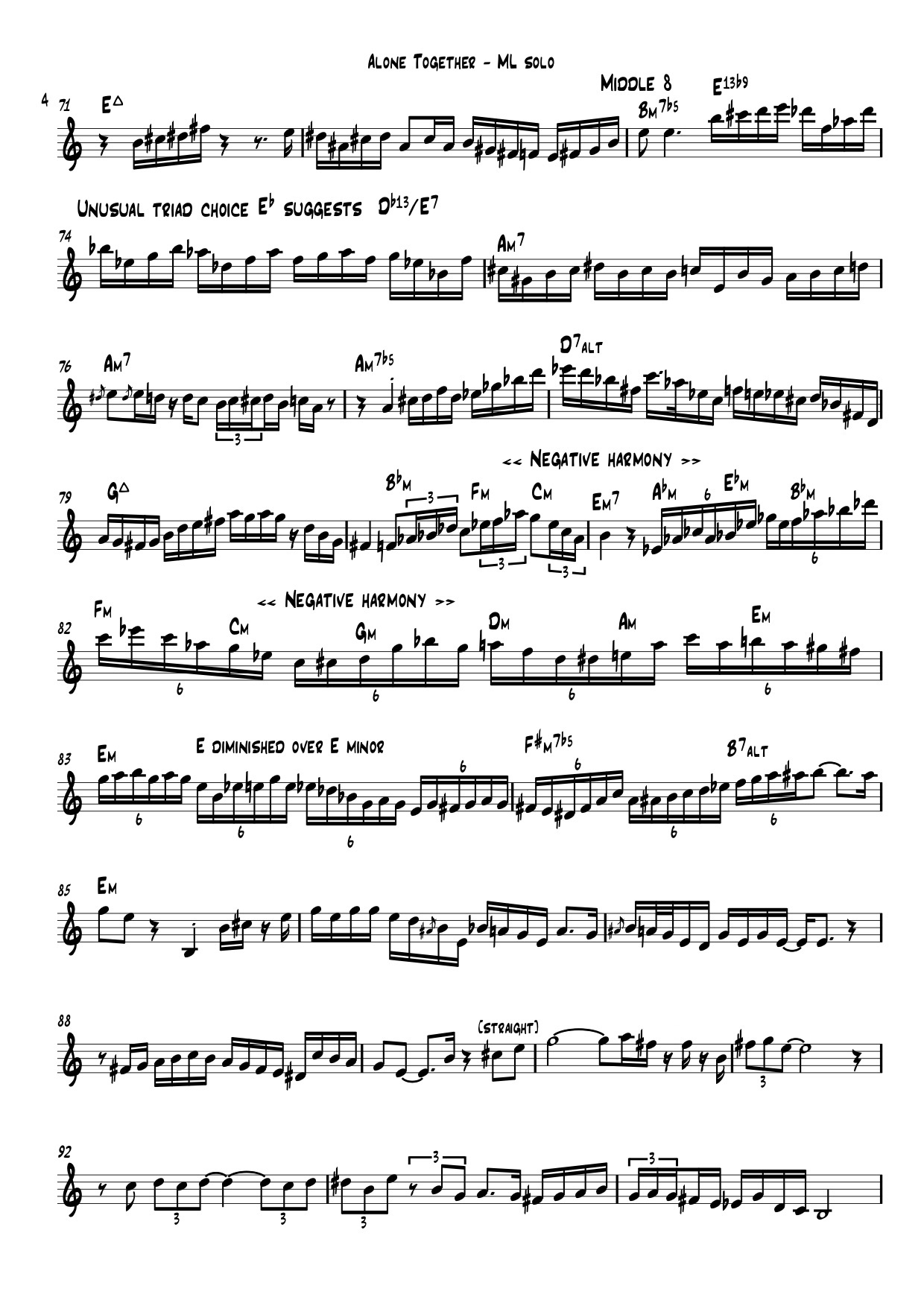 Further Explanation of some of the techniques
1) Semitone up for the Altered.

This is a nice technique for modulating to the IV chord in a minor blues. Here E minor melodic for the tonic and F minor melodic for the E7 altered. Some players stretch out the E altered by going early and/or resolving late, to maximise the out of key effect. John Coltrane was an early exponent of this and later Steve Grossman, Chick Corea, Bob Berg and Michael Brecker.
2) Giant Steps substitutions.

John Coltrane famously pioneered the triple tonic system as an alternative to the cycle of fifths, perhaps hitting on the idea after hearing the Richard Rogers song 'Have You Met Miss Jones' from 1937. In this solo C#m7-F#7 > Am7-D7> G is substituted with B (or C#m7) > D7-G-Bb7-Eb-F#7-B-D7 > G.
Later in the solo this formula is treated more and more freely, in a manner similar to the style of John Coltrane from 'A Love Supreme' onwards, culminating arguably in his amazing album 'Interstellar Space'. For more on this refer back to the blog entry from February 2nd for a Coltrane example of this technique.
Here are the other three variations on the video:
From bar 23: