Following on from my analysis of Lee Konitz's tune 'Ice Cream Konitz', here is a look at Warne Marsh's 'Marshmallow':

Tenor saxophonist Warne Marsh is the least known of the triumvirate he forms with Lennie Tristano and Lee Konitz. His compositions share many of the techniques of his compatriots, but show that he clearly has his own style. Marsh's astonishing take on Cherokee 'Marshmallow' was written in 1949 when he was 22 years old. The fact that he named it after himself suggests that it may have been a personal landmark and it is a very bold statement. As usual with Cherokee contrafacts, Marshmallow is played at breakneck speed (cf. Stan Getz - 'Parker 51' and George Coleman - 'Apache Dance'). The melody soars to altissimo Ab and even B at high speed, making this easily the most virtuosic saxophone head of the 1940s and one of the most technically difficult of all time. Lee Konitz and Warne Marsh, two 22-year-olds at the top of their game, fly through the melody, making it sound very easy. The chains of perfect 4ths and crochet triplets give the piece a modernistic, other-worldly sound. Some of it sounds rather passé to our ears (the theme from Star Trek springs to mind immediately), but it was written in 1949, when people were fascinated with the new atomic age, 'B' Science Fiction movies ('King of the Rocket Men'…) were popular, and Orwell's 1984 was published. For 1949 listeners this must have sounded like jazz from another planet. On a more serious level, if the rhythmic framework of Marshmallow were played on a drum kit, with all its displacements and groupings, it could be a drum solo worthy of a Frank Zappa piece. Some of the techniques in the piece draw parallels with 20th century classical music and anticipate the post-modern jazz of the 70s and 80s.

Contrasting with the Lee Konitz piece previously analysed in this blog (Ice Cream Konitz), Warne Marsh does not make the same use of space, preferring more of a sense of urgency with long, winding lines in the bridge section. He uses a greater variety of superimposed triads and isorhythmic groupings and some very daring and original 'out-of-key' melodic effects and rhythmic displacements. Ice Cream Konitz is an early Konitz piece and a simple example however. Marsh's composition does not have an intimate relationship with the melody of Cherokee, as Konitz's piece does with Perdido, but Marsh achieves unity throughout the recording by extensive use of his compositional material in his improvised solo. In this he is moving towards pure improvisation rather than stylistic jazz playing.

**9) Use of C# major scale over B major 7(#11) -  D#m6 or G#13
This could be explained as fully modulating into the key implied by the Lydian (C# triad) and is revolutionary in that the root is omitted in the scale (bitonality - cf. Ravel, Bartok)

**10) Over A major 7 in the bridge: an implied Ebm-Ab7-Db substitute progression.
This is also very adventurous and could be:
(i) a minor 3rd transposition of the regular II-V pattern, implying some kind of '4-tonic' theory (Diminished axis)
(ii) a kind of anticipatory 'side-slip', the Db approaching the D7 (Tristano)
(iii) An A major 7#5 with the melody line actually modulating to the key implied by the Db triad superimposition (genuine bitonality - Bartok, Stravinsky)

11) Extreme altissimo - high G# and B (at speed!) during the bridge (nobody else comes close - for a written melody - until Michael Brecker circa 1980)

12) Great technical dexterity and fluency, even in the fourth register (Coltrane, Brecker)

14) Chromatic alterations to the major chord II (unusual for a secondary dominant, since it resolves passively onto a minor chord II)

16) Extensive use of the compositional material during the improvised solo for greater unity. 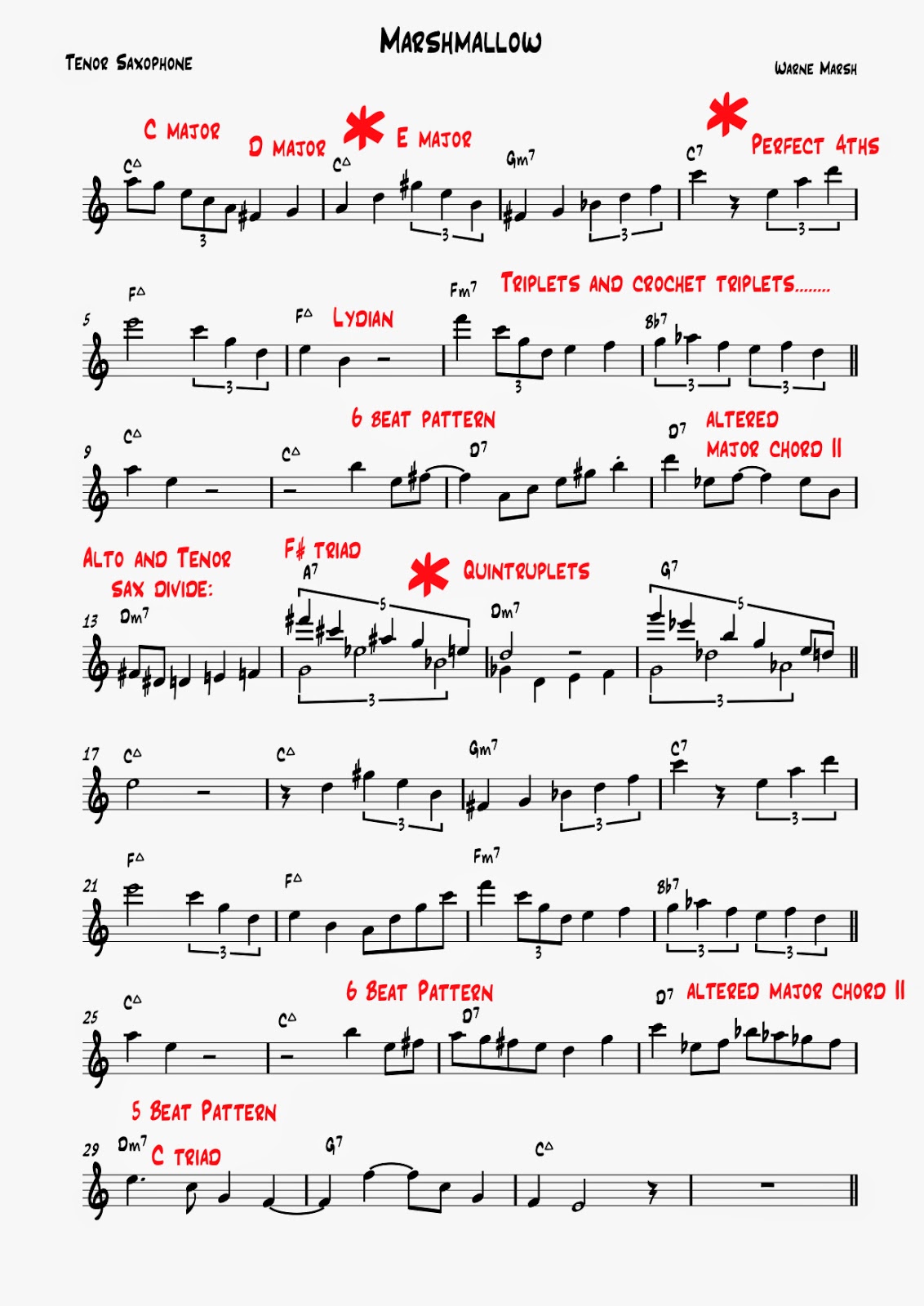 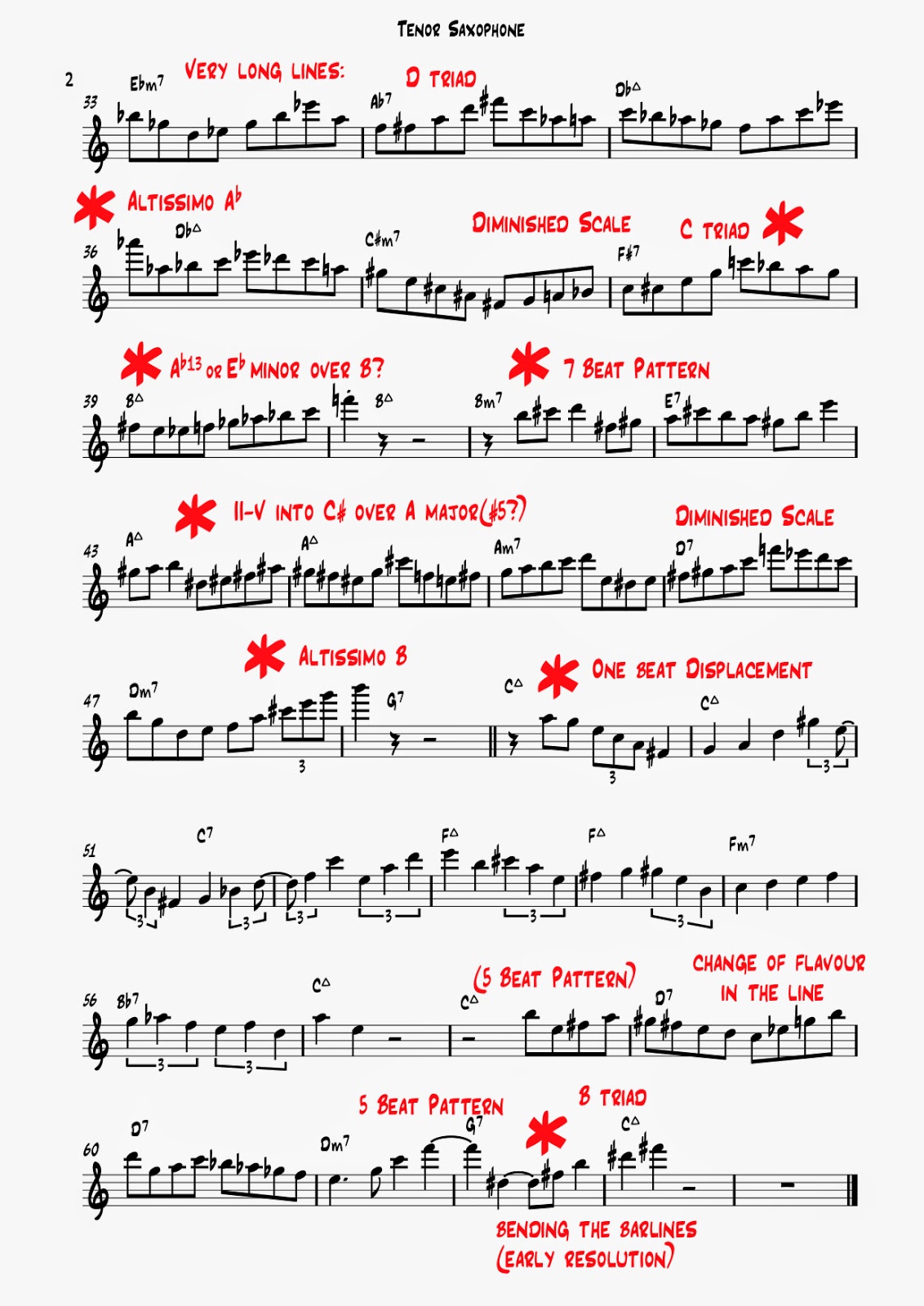 Posted by Mornington Lockett at 13:08 No comments: