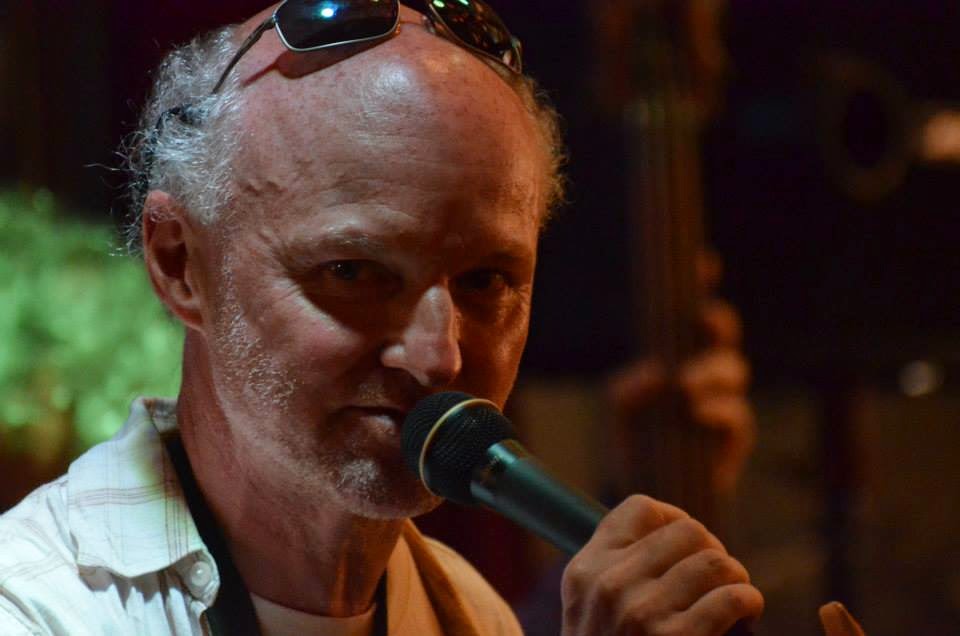 The subject of my masterclass at the Dordogne Jazz Summer School this year was the music of Lennie Tristano, Warne Marsh and Lee Konitz from the 1940s and 50s. We spent a day working on their pieces and having fun with their way-out improvisation techniques.

This is one of the great tunes we covered, with a fuller analysis than I was able to give in my short talk - Lee Konitz's 1950 take on Perdido:

Lennie Tristano, Warne Marsh and Lee Konitz, three peas in a pod in the late 40s and 50s, used to make light of their compositions by naming them after themselves and each other. Lennie's Pennies, Lennie-Bird, Marshmallow, Subconscious-Lee and Friendlee to name but a few. This was a cute method of self-publicity but it also betrayed the self-critical, obsessive nature of the group, one reason why they did not perform and record prolifically, and still remain unjustly obscure to some jazz lovers.

Ice Cream Konitz (1950) has a suitably throwaway title although it is an incredibly well thought-out composition. Following the example of Charlie Parker, a friend and acknowledged hero of Lee Konitz, the tune is a contrafact of a familiar tune, Duke Ellington's hit, Perdido.

The opening motif is single melody implying two-part writing. The lower part is a chromatic idea which recalls Ellington's backing line, used by Parker and Gillespie as the theme in their Massey Hall version. The upper part is a three-note grouping, similar to the Perdido tune but backwards. The combination of the two ideas produces a semitone plus an upward leap of a seventh, the overall shape very similar to bar 6, the hook line, of the original Perdido melody. This idea is developed rhythmically and melodically during the first four bars. The crochet triplet development in bar 2 could be a reference to the melodic character of the  middle eight melody of Perdido. The fourth appearance of the seventh leap in bar 4 is ornamented using a technique called 'melodic filling-in' to become a flat 9th arpeggio. The second motif in bar 5 uses the opening semitone idea again, with a rising scale added before the rising arpeggio idea again. Here Konitz uses a D major triad over the F7, a relatively new sound for that time. Bar 7 has the melodic shape from bar 5 in inversion and displaced a quaver early, two compositional techniques more common to contemporary classical music than jazz. This leads to a rising arpeggio and a three-beat sequential pattern, the first of three odd-number patterns in the piece. The use of three, five, six and seven beat groupings over 4/4 was a technique passed on from Lennie Tristano to his acolytes and quite revolutionary for jazz in the 1940s and 50s. In bar 10 the idea from bar 7 is used again. This time the rising arpeggio is a C major triad over a Bb major 7th chord, another new sound for the time. From bar 10 there is a six-beat rhythmic pattern repeated, the second example of an unusual grouping.

Bar 13 begins with a tone followed by a minor third. We could identify this as the 'Perdido' motif. This is followed by another seventh leap, downwards this time, continuing the principle of constant variation and development, the whole shape being almost the opening phrase backwards. Bar 14 has the same Perdido fragment a tritone away, the tritone substitution of the bebop period but also anticipating the altered pentatonic approach used from the 1960s onwards. This resolves onto a Bb major7#11 arpeggio but a beat early, an example of what Tristano-ites describe as 'bending the barlines', the natural ebb and flow of the melody, unhindered by the time signature.

The bridge starts with the Perdido motif again, elongated, followed by an astonishing two completely empty bars. The second half of the middle eight also has a yawning empty space. The bridge of a 32-bar tune of this type is the area of greatest harmonic tension. If we compare two of Charlie Parker's best known tunes with the same middle eight, Anthropology and Moose The Mooche, there is a lot of activity in the bridge, spring-boarding into the last eight. In Ice Cream Konitz the composer creates perhaps even more tension and expectation with the use of silence. Amazingly the head and two choruses of improvisation on the recording contain 105 silent beats in total - 3/4 of a chorus of silence out of three!

Konitz's last eight rounds the tune off with an artfully reworked version of the opening. This can be seen as a loose inversion or retrograde of the original theme, with the upper of the two parts rising, followed by seventh leaps downwards this time. The crochet triplet is still there, and the semitone has become three notes, up and down. This creates two five-beat phrases, the third example of an non-duple rhythmic grouping in the piece.

Ice Cream Konitz is one of the simpler of the contrafact compositions by Lee Konitz, but is a miniature masterpiece, reworking actual melodic material from Perdido, as well as the chord sequence, and showcasing an arsenal of modernistic compositional techniques along the way.

1) Use of the chord sequence and the melodic material of the original to fashion the contrafact.
2) Use of motifs and intervals in transposition, inversion and retrograde to develop the melody (Schoenberg, Webern)
3) Use of melodic filling-in and chain-association to transform one ideas into the next idea. (Ornette Coleman)
4) Use of superimposed triads - D/F and C/Bb (Others - B/C and E/C used in other pieces - see also Lennie Tristano, Warne Marsh)
5) Use of 3,5 and 6 note isorhythmic groupings against 4/4 (7 used in other pieces - Tristano, Marsh)
6) Use of the tritone pentatonic/substitution (McCoy Tyner)
7) Suspension, expansion, contraction, displacement - 'bending the barlines' (Tristano, Marsh)
8) Use of silence to balance expectation and release (John Cage) 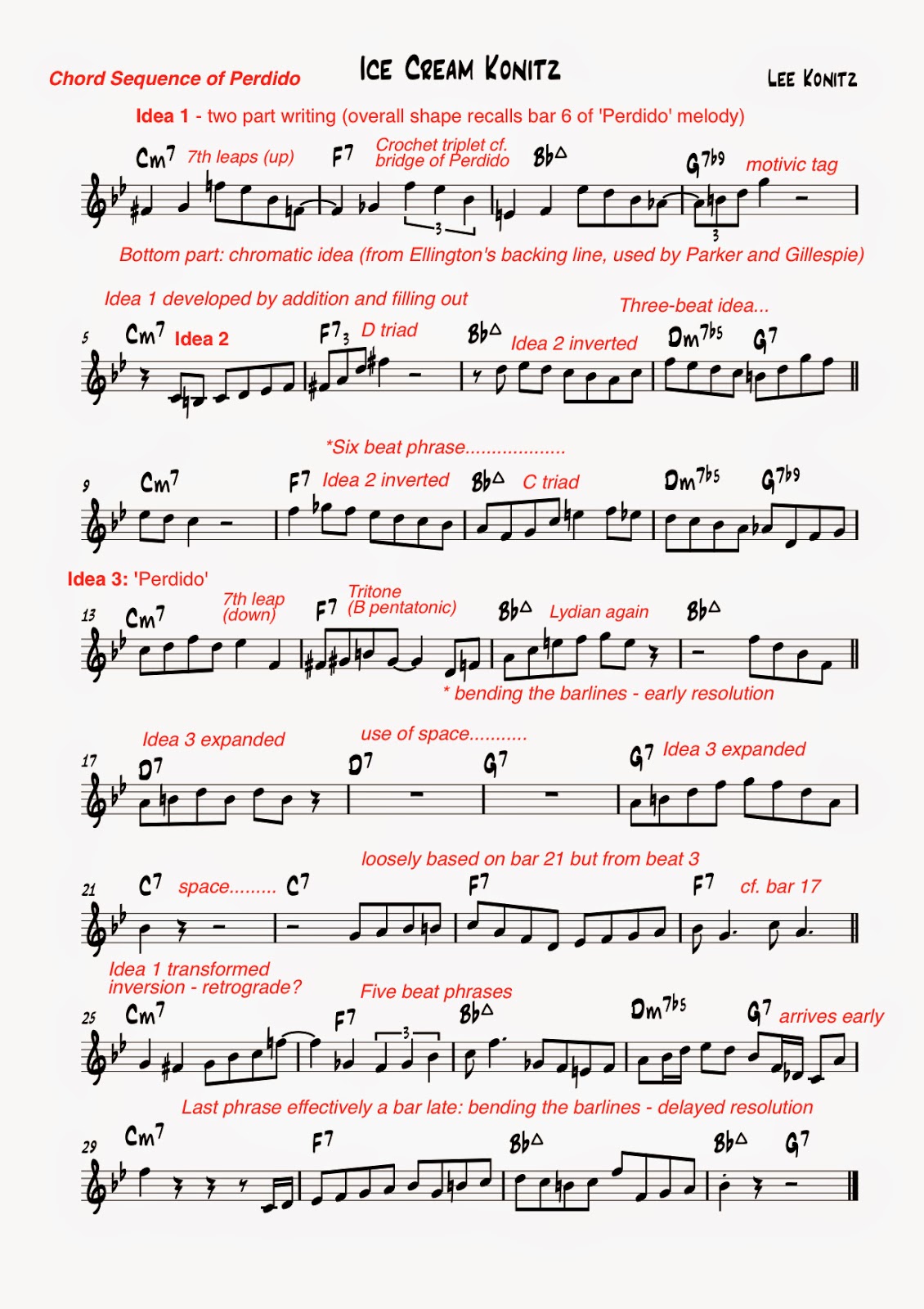 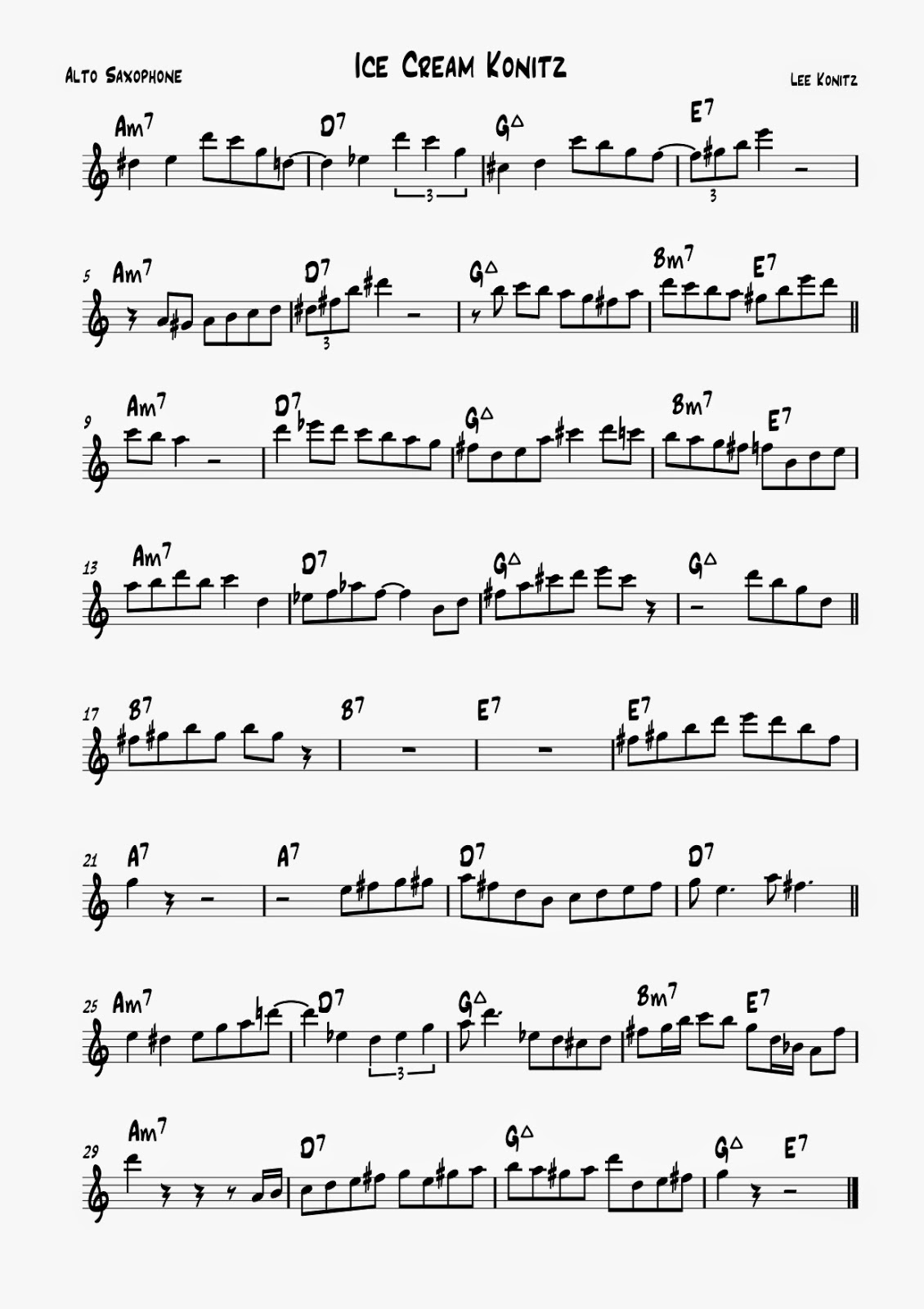