In this video (in which incidentally I am demonstrating my new signature soprano mouthpiece produced by SYOS in Paris) the concept of Negative Harmony chord substitutions is much more developed than in previous examples. The concept derives, readers will remember or can scroll down, from Sonny Rollins's and Sonny Stitt's circle of 5th substitution system, as used in 'The Eternal Triangle'. Appropriately enough this time, the Negative cycle of minors in 4ths, in numerous guises, is expressed this time within the tight form of Rhythm Changes:


Analysis: Initially I aim for the subdominant chord in bar 6 of the sequence: Gm, Dm, Am, Em, Bm, F#m, C#m, G#m, Ebm, Bbm -> F7, Fm7, then rounding off the first 8 with a two-bar, 'backdoor' negative loop turnaround - C, F#m, C#m, G#m -> C. In Negative Harmony the diminished chord is invertible, as are tritone substitutuions, so Fm > C as V-I and the 'Backdoor' G#m > C can be transposed to give Bm > C and Dm > C. All four are valid resolutions for a chain of chords. In addition to this it is possible to jump between these streams. In conventional musical theory D7, Db7 > C can be used as a substitution for the cycle of fifths. In this negative theory the equivalent would be Em, Fm > C., ascending in semitones. Jumping to the Backdoor stream would give Bbm, G#m > C, descending in tones. A major third jump up such as C#m, Fm > C is the fourth move possible within this system. These four moves can be mixed freely, giving many possible ways to construct alternatives sequences.

In the first bridge I am approaching the main chords i.e. A7 in the 3rd bar, using the 'Backdoor' route. The last two bars of this middle eight are a tritone substitution backdoor: G#m, Cm, Gm, Dm, giving a conventional Dm where the G7 would normally be!

In Bar 49 (second chorus, second eight) I run a long sequence with five-beat groupings, starting with Ab minor, aiming ultimately for C, although there is not enough time (it's improvising!) and the C becomes Fm of an E7 altered chord for the start of the bridge.

Altogether this system works because the listener hears the pull towards the cadence points, although vertically the idea of a chord played on top of, or in place of, another chord is virtually a lost concept here. One of the central concepts behind this is the idea of movement within music, to keep the interest and energy moving forward.

Once again I am indebted to the people at SYOS, or Shape Your Own Sound, for their help in developing the mouthpiece, which is an incredibly versatile, free-blowing piece of kit.

The soprano sax is a P. Mauriat PMSS-601DK, 'saxello' style instrument, kindly provided for me by the company back in 2007 and still going strong. 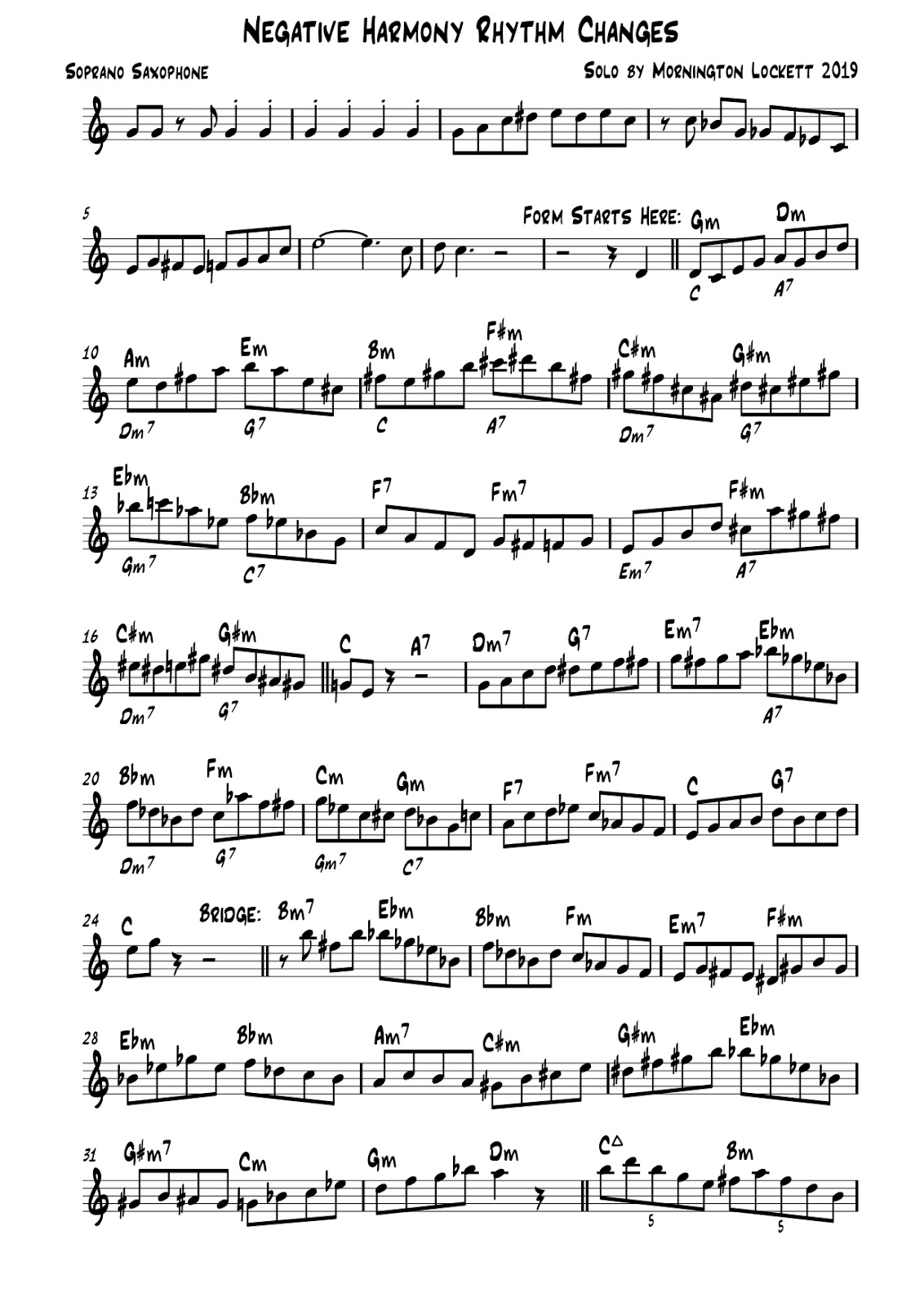 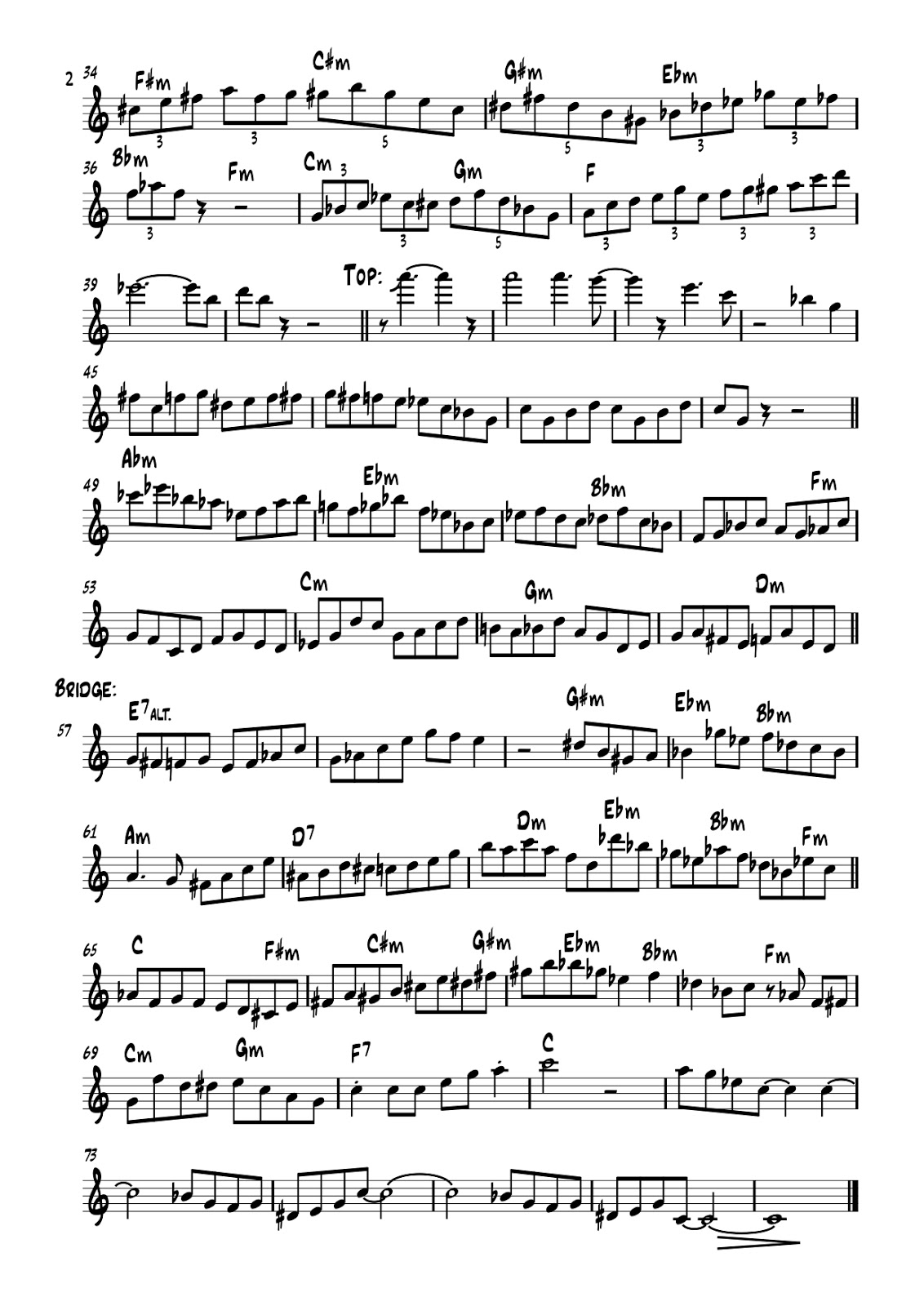 Posted by Mornington Lockett at 06:18 No comments: